We managed to finish off the remaining smaller projects for the season, and with the school addition in Katang Xieng well underway, it was time to look at a number of projects requested of us, for next year.

All the projects we are considering are in the Nambak district which is about 2 hours north of Luang Prabang, although considerably further to the villages themselves because they are well off the travelled roads.  We took a minivan as far as we could go into the highlands and then were told that we would be transported by tractor.  We weren’t impressed – not everyone can do the tractor, depending on the terrain so Joan and John decided to stay behind, but, with some good luck, a heavy duty truck came instead – while not exactly comfortable for me in a small space behind the front seats, or Siphan and the chief who had to stand in the back but it was a welcome surprise that we could all go.  It was well worth it.  As we eventually got to the destination (about 4 hours in total), the village was waiting for us with baited breath, hoping for the miracle of water. 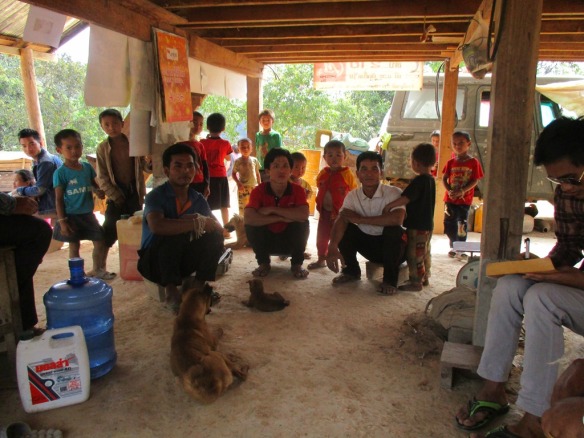 The village was pretty happy to see us. People just kept coming…and coming…we met under a house for the meeting.  Siphan is making copious notes (in the right) for me.

We discussed the options and possibilities for water next season.  They had a dam but that was it.  No pipe, water tank, taps etc.  The most difficult issue was that there are three parts to the village, each on its own hill top.  With the engineer present, he explained that a tank would be built on the highest part of the village and have pipes run to the other two hilltops.  It seems fairly easy but over 9km of pipe to this section of the village is a lot..no wonder the cost estimated, is so high.  This is going to be quite a challenge to raise over $70,000…and this doesn’t include water filters.

Next, they took us to the current water source…I wasn’t sure I really wanted to go…especially when they started to chuckle to themselves.  I took the challenge. 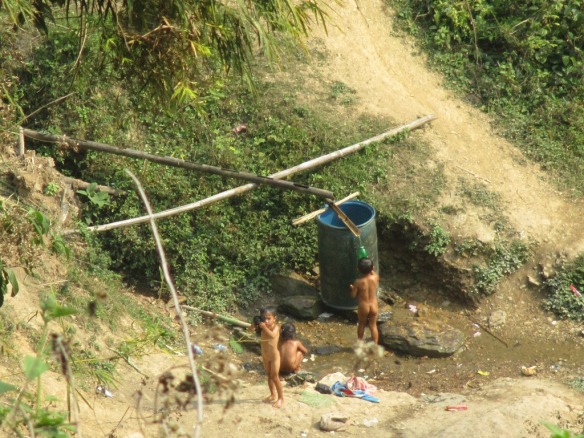 This is a zoom shot that I took as we got to a viewpoint on the way down.

This gives you some perspective of the terrain…so difficult. I think it was the women and children that collected the water in the mornings and evenings.

The size of the bamboo pipe was just the thickness of a baby finger, cut in half. It must take foever to fill the jugs. You can see the mother and kids in the distance.

Can you imagine having to climb that with a kid AND water jugs on your back? 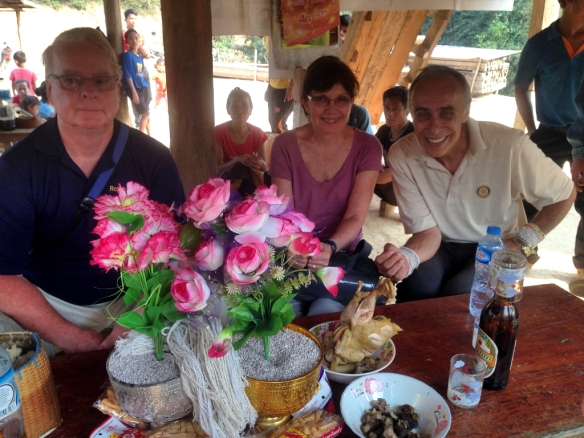 They held a surprise Baci celebration of friendship for us. As you can see, they slaughtered a chicken. I think they hoped that we would remember them while we struggle with a decision. This picture was taken just before the baci started.

After heading to a guesthouse for the night, and struggling to find food for our guests to eat, we headed to two more villages the following day.  The first was to a village and school.  The school officials were waiting for our arrival.  We noted that the village seemed a little wealthier than the rest with many of the homes built with cement, a far cry from where we had just been the day before.  The school however was a bit of a surprise.  An organization built the school in 2009 but it was never finished – they never came back to officially open the school and the contractor took off.  I suspect he took off with the rest of the funds and promised to finish it but never did.

You will note that the ceiling is missing. We also found out that the contractors only supplied 15 desks for the students…for the entire 5 room school, instead of 15 desks per room.

As a side note, we will be attempting to contact the French organization that built it.  2009 is a long time ago.  It makes  you wonder if they are even aware.  Meanwhile we have applied to a Canadian organization for funding of the desks. 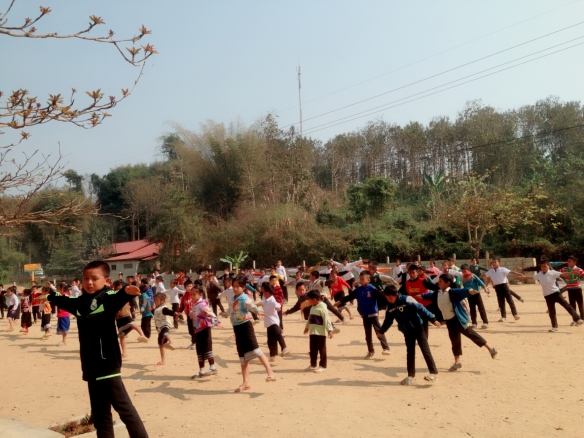 The kids exercise period. I started to join in, to the kids delight, but John wouldn’t go for it.

We visited a good chunk of the village too.  While some of the homes were bamboo, there sure were a lot of families that we would consider wealthy.  Without a formal proposal, complete with a survey, diagrams and a materials list, we won’t proceed until we get them.  Even then, we will have to find a way to simply subsidize it, as opposed to paying for everything.

Our last village was interesting.  It was located on a different range of mountain tops.  There were actually two villages.  The first village cut the water supply to the second village because there was a shortage of water.  The second village does have a tank though along with pipes in the village and taps (although dry of course).  We will again wait for the survey to see if the current dam will be sufficient to run a second pipe to the village but it will have to wait for another year because our time is running out. 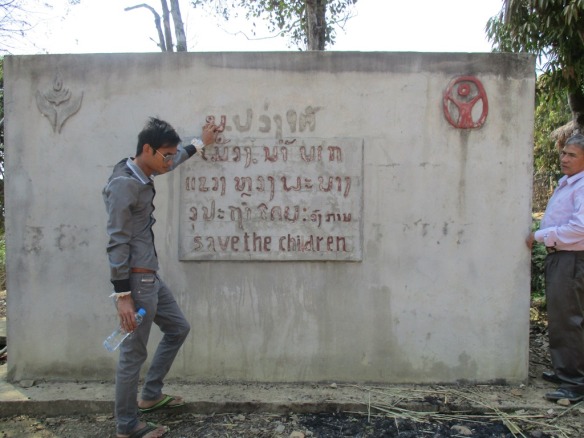 Siphan, with the engineer in front of the existing tank.

The first village, that cut off the supply to this one.

It was a tough week for us.  With Joan and John leaving us, Gary from Richmond Hill gone now and Ian from New Zealand also returning to his home, it sure is quiet here. I regret that we couldn’t do more with all of them but it is very late in our season and of course cashflow becomes the name of the game so we have to be careful.

We have one last trip to make with the last guests – one is here already and the other arrives in three days, then it is homeward bound for another fundraising season.  Having said that, I have been working with my airline consolidator since January 7th and they still can’t confirm a return flight for me.  They made a mistake when Korean made a schedule change.  The consolidator changed my flight – Instead of going from Luang Prabang to Hanoi to Seoul, Korea then to Toronto, they changed it so that I fly from Luang Prabang to Hanoi after my return to Toronto which is physcially impossible to actually fly.  As such, I still don’t have a confirmed flight.  It has taken forever and I am worried.