As our avid readers are aware, nothing is ever straightforward and usually difficult at best.  So many things can go wrong and usually do BUT I am proud and happy to announce that this project was concluded with only minor hitches along the way.  We arrived back in Vieng Hin the day before their celebration of Hmong New Years and the party was pretty much underway.  Each village family (137 families) was required to pay 100,000 Kip which is a lot for them, in advance of the celebrations.  So on the first day they slaughtered a goat and 2 chickens.  A little further into the village we noted the cultural ball toss.  This is a practice whereby the boys and girls, men and women dress up in their colourful traditional outfits and toss a ball back and forth to their hopeful future partners. If someone drops the ball, it is believed that they are not interested in the partner.  These days it generally means that that they can’t catch (that would be me).  At some point the man/boy invites the girl to drink and eat with them, perhaps take them to see the caves together or the farm where they can spend some quality time together.

While some Hmong will go all the way with the girl if they want to, it is generally considered sinful and the couple are required to wait a week to see if there are any other takers for the women.  This is a nervous time for the couple.  Another Hmong man may visit anytime during that week, usually from a different village, and claim the women.  If she isn’t interested, it is simply too bad for the woman because she will get locked into a room until she accepts or until the man feels it is a useless attempt (at least a week).  The woman is fed of course.  I suspect this doesn’t happen very often any more but it seems unethical.  After that is marriage and lots of kids but more about that later.

After a short visit we headed to inspect the dam and the water tank.  Due to the landscape the dam location was moved about 50 metres to the south of where we thought it was going to be but not a big deal.  I should point out that Gary, a good friend from Canada (Richmond Hill) was there also and each of us was assigned a vilage Ambassador.  Indeed they were beautiful but we know better than to flirt with them.  The girls were certainly flirting with us though.  Deb (Gary’s wife), when you see the picture, don’t get too excited…Gary was a perfect gentleman…I might have a couple of pictures though that could be considered as blackmail material (KIDDING).

Looking at the dam from above. You can see the board holding back the river.  They wanted to wait for us to arrive so they could officially remove it as conclusion to the project (allowing the river to continue to flow) 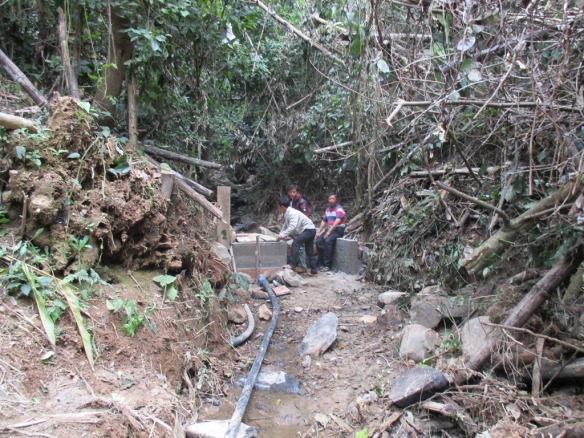 They are getting ready to remove the board…needless to say, we stayed out of the path to avoid getting wet.

Don’t worry Deb…the lady standing by Gary, was really after me.

This is one huge tank for 137 families. However, considering the average number of people per family, I should not be surprised.

The ladies followed us right up the ladder. We are standing on top of the water tank.

The last task of the day, before heading back to a guest house was to handout uniforms from Afrisoccer who donated them on behalf of Ontario’s Durham Region Sports Clubs.  They provided slightly used jerseys, shorts and socks.  The one issue with the socks was that only a couple of the players had proper shoes – they usually play barefoot.  The soccer field was in use but it didn’t take the team long to dig post holes, put in posts and string a rattan ball net.  We have video (still needs to be edited) but the kids were pretty nervous playing in front of the Falang (foreigners).

These kids are sooooo shy! I had to tickle them to get them to smile for the camera.