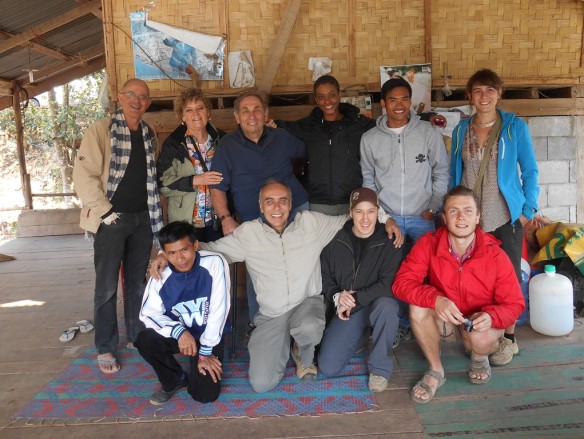 Clockwise from back left; Ian from New Zealand, Patti and Marty (raise money from bridge tournaments), Laetitia from Toronto Twilight Rotary, Siphan our co-ordinator, Charlotte and Marcus (French Couple who built the playground, Nicholas (Rotarian and Laetita’s husband, myself and our driver.

I just looked at my last blog posting…March 19….hmmmm… A lot has happened since then.  We still had a couple of projects left to finish off when I returned a week later!  We had visitors from many countries come see and in some cases participate with our work, including people from Belgium, France (This couple built a playground for the school kids), Italy (Ink for Charity who have since pledged $10,000 towards a school), Spain, Israel (they helped us paint a school), New Zealand (lived with the villagers during the build of toilets and a school), Australia (sizeable donation towards the Na Lea Water Project), United States (Art assisted in some major sponsorship too..3rd year running), Xenia (sponsored several water filters) from the US, and Canada (wonderful sponsors from Saskatchewan, Rotary Club of Toronto Twilight,  and some dear friends (and sponsors) of ours from Port Hope and Cobourg (one is a Cobourg Rotarian).  As a result, we did run a little late with some of our projects, in attempt to pick up and drop off visitors every few days.  Here are some highlites of the finished projects;

Rosie and Chris (with the hats) inspect the dam that is just curing before the framing is removed…I hope they aren’t waiting there for it to cure…LOL.  They were major sponsors for this dam and arrived just after I departed.  I wish I could have met them.  Rosie found out just a few weeks before arriving that she is expecting! 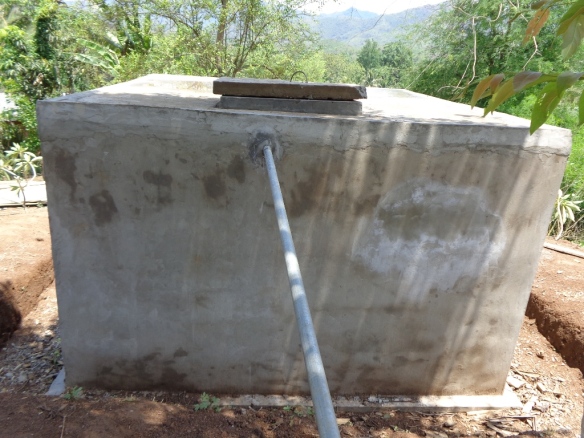 OK, so it is a bit ugly, but it does the job and the villagers are thrilled! (hmm…I thought I had a prettier picture than this).

We constructed the last four toilet banks for Pha Yong Village to bring the total number of toilet to 21. Villagers are pretty happy not to have to find a private bush! Rotary Club of Northumberland Sunrise (Port Hope and Cobourg) and Robert Wing from Movie Experts in Bowmanville, Ontario sponsored this bank. 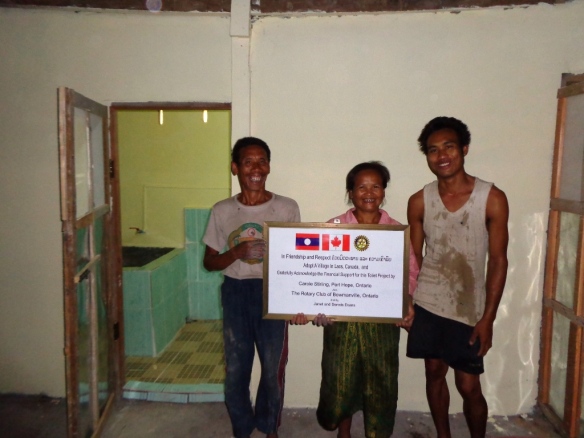 They hadn’t quite got to mounting the sign yet but were pretty excited – this was the first toilet of its kind (with running water) in the village, now that we finished the construction of a humungus water tank. The builder is on the right, so you might have guessed. Hopefully he can buy some new clothes now! 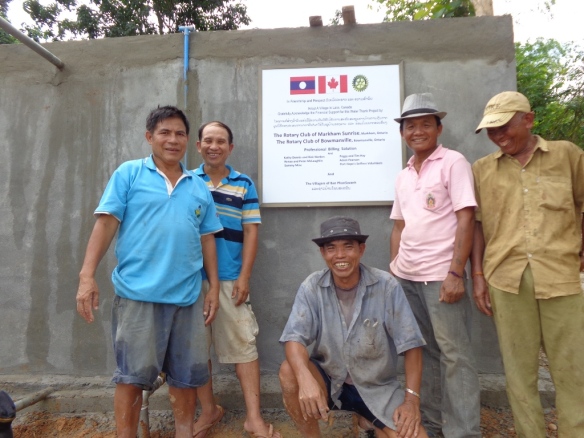 This seemingly took forever to complete. I wasn’t sure if I had enough money left to do it, since we went way overbudget on this project – 2 dams, 50 tap towers throughout the village, 9.2 km of pipe and then this (never included this in the original request). The early arrival of the rainy season didn’t exactly help either. 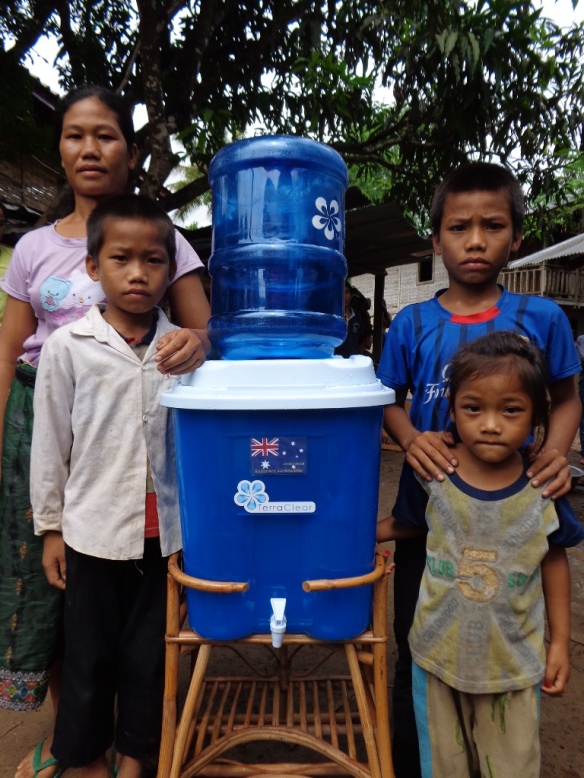 We just completed the distribution (and hygiene training) for 204 water filter systems. This filter is donated by Jeremy Arnott of Australia with thanks. For $75, you can sponsors a filter too!

So that concludes the season!  It was perhaps the toughest season we have had – lots of issues this year in getting the projects started, but with lessons learned, we hope that next season will be a lot smoother.

As far as the fundraising for 2014/2015, we are well underway.  Details are included on our Fundraising Updates and Current Projects Page but in a nutshell, we hope to do 600 water filter systems this year (come to think of it, I think I forgot to include that on the page), 2 toilet banks, one 2-room school, 2 major water projects and sponsorship for a lot of students ranging from $60 per year to $2,000 for our university student (although $550 has already been raised for towards that goal).  We also have a teacher to sponsor for his last year as apprentice ($1500 with $250 raised so far).  For the students and teachers, we need to raise all $5500 by the end of July!  If you have some interest, please don’t hesitate to contact us.  I would be happy to give you more detail – we accept cash, cheques, Visa and MasterCard.  Every penny donated goes to these projects and not to overheads plus you get a tax receipt (in Canada)!  For those of you out-of-country, perhaps a tax receipt isn’t really needed for smaller donations – just $60 for a primary student for a whole year!  (Students will have their pics taken and will write a letter to their sponsors and a translated copy will be emailed with their pic).  The English Student and University Student will do a video for us. (click the video tab at the top and you can click on Oudone (student) or Khamdy (teacher) for last seasons video.